Are you missing Disneyland? I am too. Last December, I was Jonesing for Disneyland and put together a little video of the sites of Disneyland. It’s very exciting that Disneyland, although not opening, is expanding what is opening and it Park experiences.

I decided to share this video again. Enjoy “Seeing” the sites of the Disneyland Parks:

Want to see the Un-Seen sites of Disneyland? Be sure to check out my Seen Un-Seen Disneyland book series. 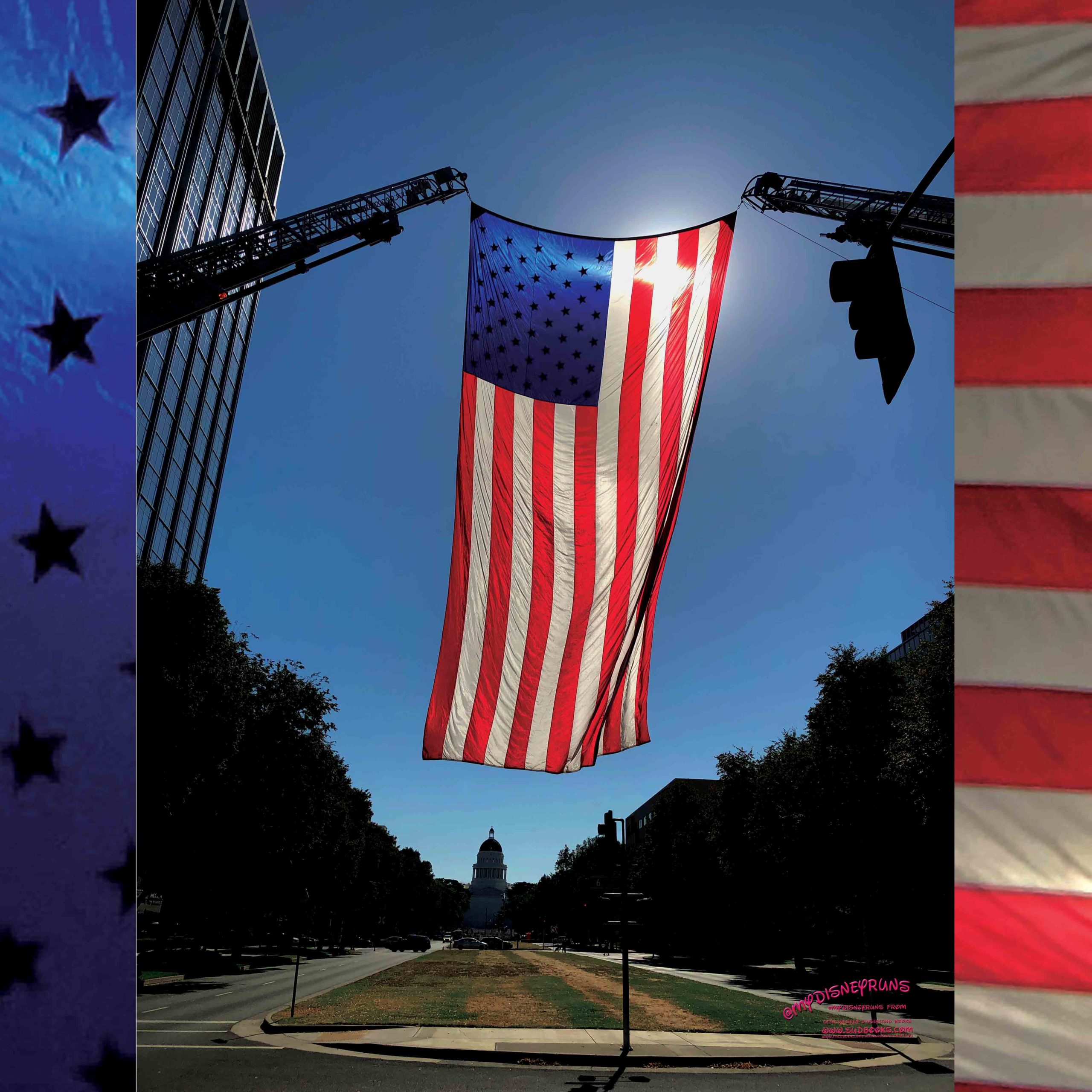 All gave some, Some gave all. Memorial Day is the day set aside to remember those who gave their all so that we can enjoy our freedoms. Please take a moment to remember our fallen service members. There has been a lot of discussion lately about our freedoms, is the government doing too much, are they doing too little, etc. Well remember, if it wasn’t for our fallen service members, we wouldn’t have these freedoms. Let alone be able to even discuss them.

For the past month or so, I have been hooked on watching the HBO mini-series “Band of Brothers” over and over. It is so humbling seeing what these amazing men did for us. It is also motivating. I also discovered a show called “Dick Winters: Hang Tough” – the life of Major Winters of Easy Company and “A Company of Heroes” – the real life Easy Company men telling their own story.

These movies really remind us of what sacrifice is and what heroes truly go through.

I also want to take a minute to thank all the hard workers out there battle COVID-19 so we can sit safe in our homes. And to remember those great warriors, many who were active service members, who fell to this horrible disease.

My heart felt condolences to all those affected by this event.

Why did Walt Disney care about adding so much Details to Disneyland ?

I’ve been asked many times why did Walt Disney insist on adding all the extra Details to Disneyland ? Most of the other parks that exist today don’t have so much detail. The amusement parks that existed at the time clearly didn’t have so much detail. Those two sentences answer the question. Disneyland was not to be like any amusement park that existed at the time and was not meant to be like an theme park that might follow.  Walt Disney wanted his park to be better than that. He wanted his park clean, he wanted it to revolve around family enjoyment, he wanted his “guests” to be treated professionally by his “cast”, and he wanted people to have a smile on their face. Walt is quoted as saying to the original WED designers (later called Imagineers), “All I want you to think about is that when people walk through or ride through or have access to anything that you design, I want them, when they leave, to have a smile on their face.” (footnote 1) For Walt Disney, it wasn’t primarily about making money, it was about building a place where a family could really enjoy themselves together.

When they were building the Storybook Land Canal boat attraction, Walt Disney insisted on small details in the miniature houses, including stained glass windows.  When he was asked by one of the builders, who would know if they didn’t include all the details, Walt Disney said I’ll know (footnote 2). Walt Disney knew from his experience with animation that along with a great story, great characters, and great artistic ability, you needed details. If you had a scene that took place in a bedroom, you could just draw a wall and a bed. But if you really wanted the audience to feel like they were watching a scene in a bedroom, you needed to include all the details. Night stand, water glass, cloths, etc. He had his artists watch live action models (people and animals) so they could get the movement correct. He wanted his characters to move as the human mind would expect them to.

I think even the development and use of the multiplane camera was apart of this attention to detail. Walt Disney could have continued to animate his films like everyone else did when they went into or through a scene. Walt Disney knew that in the minds of audience, they knew what was gong on, but that it didn’t look like real life. Different objects should move at different speeds based on their relation to the person moving.

All of this experience was used in the development and building of Disneyland.  It is commonly accepted today that in part, Disneyland was Walt Disney’s next step in the evolution of movies. A true multi-dimensional experience of the story. This theory even holds that the layout of the park corresponds to the structure of a movie. So going right along with this theory is that Walt Disney would want all of the details to make the story more believable. And since you couldn’t hide any missing details from this live movie, you would need to include it all to maximize this wonderful experience called Disneyland.

1. Bruce Gordon and David Mumford Disneyland, The Nickel Your: A postcard journey through 40 years of the Happiest Place On Earth. (Santa Clarita. Camphor Tree Publishers, 1995), p. 16.

A couple of years ago, I wrote a few blog posts for The Sweep Spot web page. I recently found them and decided to report them here. So here is the first of four post I wrote.

I am so proud to announce the Grand Re-Opening of the Seen Un-Seen Disneyland Online Store. You can now order autographed copies of my books directly from me.

These books are full color books with no duplication between the two. They will show you hundreds of the wonderful details that the Walt Disney Imagineers (WDI) have added to help make Disneyland the special place that it is.

Seen, Un-Seen Disneyland documents and highlights the many obscure and unique details that are built within Walt Disney’s Disneyland. With over 325 full-color images, Russell Flores brings to life—and to sight—the many wonders that Disney Imagineers have thoughtfully placed inside the Magic Kingdom. Stories, trivia, and over a dozen quizzes are part of this unique and first-of-its-kind book. Learn about things that visitors often see but not notice when visiting Disneyland. This book will make all subsequent visits to Disneyland that much more magical and inviting.

More Seen-Un-Seen Disneyland is ALL NEW material (No duplication) with over 590 new, Full Color Photographs covering more of the wonderful details at Disneyland. There is no duplication of the first book and it is about 1 1/2 times the size of the first book. This book contains such topics as: Tributes to former attractions and Cast Members, Urban Legends, Landscaping, Names, Disneyland Railroad, Haunted Mansion, and many more… There are 268 pages, 597 pictures, 321 end notes, 16 quizzes, and over 165 references.

These books will come direct from the author, Russell Flores, and are autographed and can be personalized upon request.

That’s right, I’ve finally finished my second book covering more of the wonderful details that the Walt Disney Imagineers have added to the Park. This book due to be released July 17th bring 266 more pages containing 582 full color photographs, 313 end notes, 16 quizzes and over 165 references. Don’t miss out on our special pre-sale offer. Just sent us an email at orders@sudbooks.com asking to be placed on our waiting list. The email will only be used for this special offer to be sent out once we are ready to ship. This is not a commitment to buy, only a request to receive our special offer.

George Taylor and Jeff Heimbuch just posted a review on Seen, Un-Seen Disneyland on The Disney Review. This is so AWESOME!. I love the review. Here is an opening excerpt:

“George: With the proliferation and ease of publishing books we’ve seen an influx of Disney-related titles, some good and some bad. Seen, Un-Seen Disneyland by Russell Flores is in it’s second edition and it’s a great read for people that are interested in seeing and learning about all of those little details that make up Disneyland. The book is in full color with every photo taken by the author. And we’re talking hundreds of photos!”

The MiceChat’s review of Seen Un-Seen Disneyland is fantastic.

Check out the full review at: The Disney review on MiceChat.

I’ve been getting a lot of questions on if the newest printing is a whole new book. No it is not. We did take the opportunity to correct some typos and add a couple of sentences. These additions are minimal, like noting the “Secret Bathroom” is now gone. If you have the first book already, most people are fine and don’t need to replace or add to it. Only if you need another copy or are one of those book puriests like several of my friends would you need to order. Otherwise, enjoy your first edition copy and thank for buying my book.

Check out my latest posting on the Sweep Spot podcast. This time I discuss the rising prices at Disneyland and are they way out of line. (6/6/2013)

Books about all the details you see at Disneyland, but don’t really see